Once Doc's creative juices get flowing there's really no limit to what can happen. Visit our dealership and you'll see evidence of Doc's limitless imagination all around the store. Check back here often to see what new oddities Doc is creating.

The photo to the left is a "Camshaft Cobra" statue that Doc built in 2008. The cobra is entirely constructed of genuine Harley-Davidson® camshafts & valves. Each year, Doc creates several gifts to be given away at our local H.O.G. Chapter Christmas party. Each time a member of the Wolf River Chapter volunteers to help with different events throughout the year, they get a ticket to be entered into the drawing for these awesome works of art. In past years, Doc has built lamps, tables, towel bars, flower pots, candy dishes, and much more. Almost all components of these cool conversation pieces are genuine Harley-Davidson® parts.

In early March of 2014, Doc began working on his train project. He started with a 1946 Chevy ½ ton truck chassis. He shortened & narrowed the chassis & made upgrades to the suspension to bear the weight of the huge motor that would power it. The motor that will power the train is a 1918 Fuller & Johnson 7 horsepower Hit & Miss Motor. It creates 400 RPM.

The drive system is accomplished by use of a John Deere 6 speed compact tractor trans-axle assembly all linked with hydraulic fluid drive to the motor. The wheels will be flame-cut locomotive looking wheels that drive 4 foot long connecting rods to diesel pistons inside 15 inch hydraulic cylinder bores. The piston moving back & forth inside the bore will create a “whoosh” & “hiss” sound as the air rushes in & out of the bore.

The combination of the huge flywheels spinning, the upward exhaust being expelled, the steam from the water coolant box, & the sound of the air moving back & forth inside the huge cylinders all will give it the look, sound, & feel of a steam train.

The sides of the train will be painted with the number 736. The significance of this number is that it is the same number that is on Doc’s Lionel train engine that was given to him by his Grandfather when he was 8 years old.

Doc has acquired twelve cars that were previously used at the Harley factory to move pallets thru the Harley-Davidson engine plant. These cars are all equipped with a hitch & tongue so that they can be connected together & towed. His plan is to adapt these cars into one person train cars with HD solo seats & handlebars to be towed behind the engine. C’mon and ride our train! 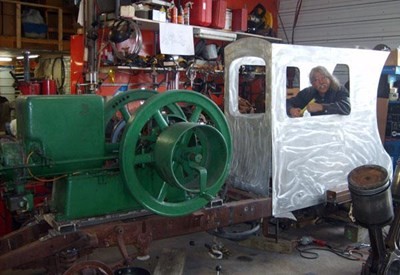 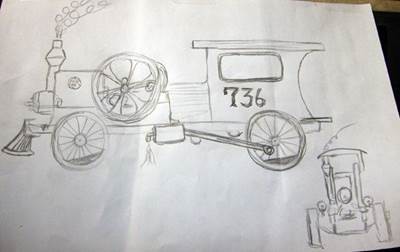 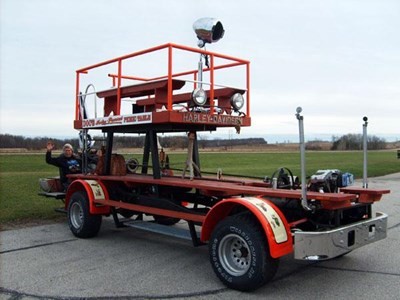 The Story of The "Four-Tee-Five" as Told by Doc

In early Spring 08', I went to an antique motorcycle swapmeet & some subliminal force beyond my control was driving me to purchase as many old Harley® Flathead 45ci motors as I could. Just prior to the Harley-Davidson® Dealer Show in Las Vegas in July 08', I was struck with what to do with all those Flathead motors....put 4 of them in-line on a long, hand-built frame with multiple passengers.

It was at the Dealer Show that I became inspired to build this bike for the Harley-Davidson® 105th Anniversary parade which was in only 4 weeks! As soon as I got off the plane from Las Vegas to Green Bay, I went straight to the steel mill to purchase metal to build the frame. At 6am the next morning, I began bending tubing & welding the frame. Then I started working on the four 1950's engines, which all needed to be rebuilt from top to bottom. I connected the throttles with a 5/16" rod that I ran through 5 separate box-end wrenches. I then braised each box end full of brass & bored them out to make them fit the actuator rod that connects to each carburetor via hand-forged linkages. All of the engine drive sprockets were cut off & replaced with dual sprockets to allow me to link each motor together. This also allowed all 4 motors to be kick-started together! All 4 engines were timed together utilizing a very old, but effective method...a cellophane cigarette wrapper!

By day 15, we kick-started the bike for the 1st time. It came to life on the 3rd kick! We backed the bike out of the shop & Doc rode it around the building with Jeff Erdman as his first passenger. It worked perfectly! Within 2 more days, the bike was done to completion with a shiny new black & orange paintjob (compliments of B&J Custom) & a new Chris-Craft horn (donated by Steve Lemhouse of the Spinning Wheel Restaurant).

Then came the final test...putting 5 people on board & making a lap around the parking lot at the dealership. Again, the bike worked perfectly. Then it was off to Milwaukee for the 105th Anniversary Parade where the "Four-Tee-Five" performed flawlessly. Accompanied by my 4 passengers, Rhonda, Shannon (my son-in-law), Kersten (my daughter), & Jeff Erdman (a good friend) we all rode though the parade with pride! It was truly an experience of a lifetime. 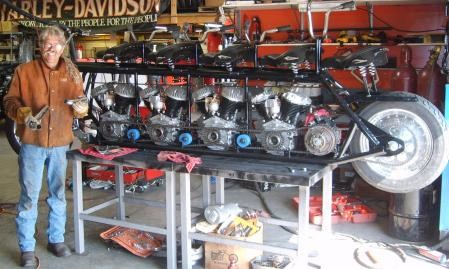 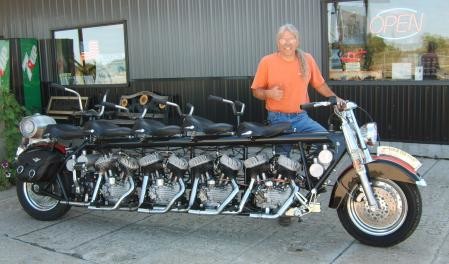 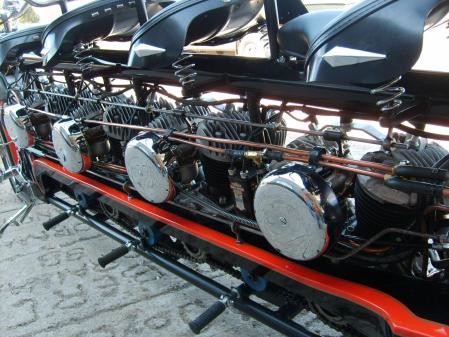 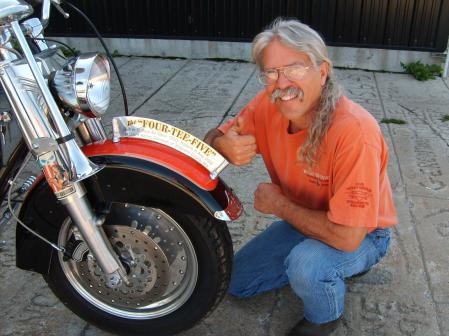 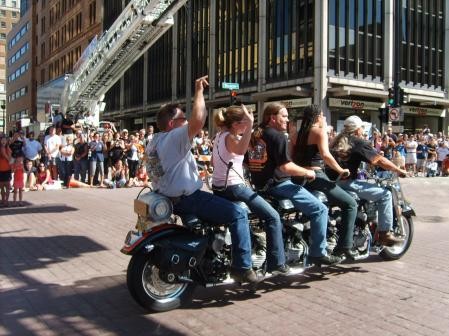 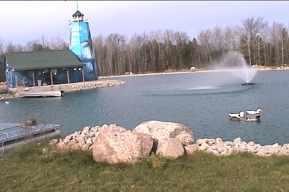 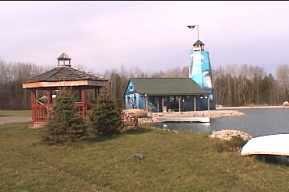 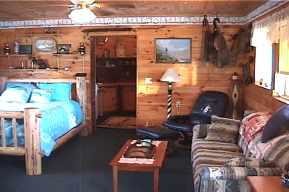 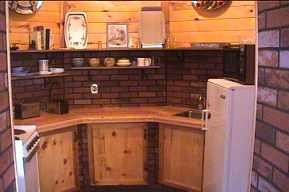 Welcome to our cozy lighthouse kitchen, complete with all the comforts of home including; fridge, stove, oven, microwave, & sink. 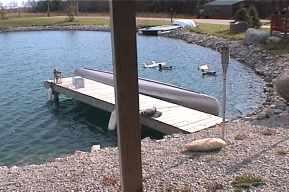 Spend your day canoeing, feeding the ducks, or fishing in our own private pond. 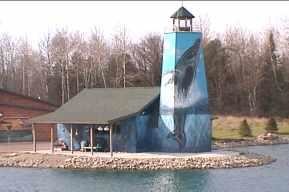 The Lighthouse is covered in ocean paintings. There are life-like whales, dolphins, blue sky, and splashing water all around. 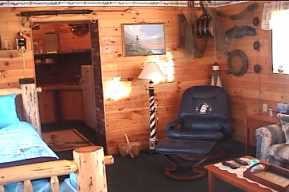 After a long day of outdoor activity, nestle yourself into our queen size, handmade Amish, log bed. The walls & ceiling surrounding you are made from beautiful knotty pine wood. 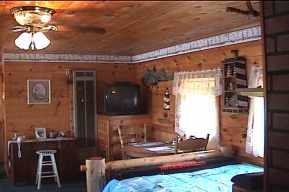 The lighthouse is trimmed with everything you need to make you feel right at home including full shower, digital cable TV, couch, & dining set. All done in a lighthouse motif. 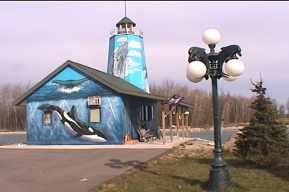 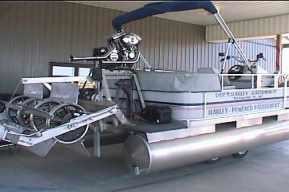 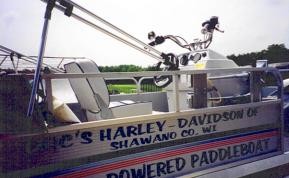 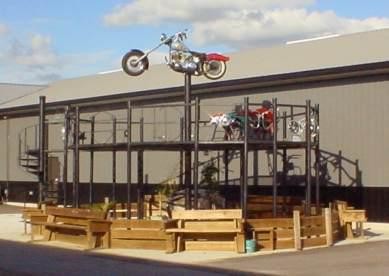 Doc's "Biker Mezzanine," is situated in our outdoor courtyard, & topped with a real motorcycle! You can take your pick of great places to sit & relax. Adventurous folks can take the spiral staircase to the top & sit in our custom furniture made with all Harley-Davidson® parts.

This fully functional ceiling fan is made almost completely of Harley-Davidson® parts. The fan weighs over 400 pounds and consists of 4 fullsize Harley-Davidson® windshields held by 4 swingarms and interlocked together with connecting rods and camshafts. This allows the entire unit to circulate the air with the help of a Harley-Davidson® transmission, belt, sprocket & hub. This fan is definitely the "coolest" fan around.

In the Spring of 2007, Doc took on one of his biggest projects; building a 50 foot long, 50 foot tall pirate ship. The ship was to be used as a centerpiece for our 28th Annual Customer Appreciation Party in late September. Carver yachts of Pulaski donated the shell. Step one of the transformation was to remove hundreds of pounds of fiberglass & wood from the original shell. Once the shell was gutted, it was time to head to the lumber yard. Several trailer loads of rough-sawn lumber were brought in from the local sawmill to build the three levels of deck including the forecastle (galley) & the aftercastle (Captain's quarters). We cut our own cedar trees from the woods & hand-shaved them for the masts. Doc hand-fashioned his own yardarms & sails. He also tied his own rat lines leading up to the three handmade crows nests. Doc scoured rummage sales & flea markets to find real antique wooden pulleys, old ropes, antique shutters & windows. Six cannons were handmade for the ship & shutters on the cannon doors were also handcrafted. The figurehead at the front of the ship was hand-carved by Jim Lucht of Chainsaw Creations. The fully enclosed Captain's quarters feature antique oil lamps, chairs, & a table. The outside of the ship was finished off by covering the entire fiberglass shell with cedarlap siding. The siding was then antiqued to give it an old look. The crowning jewel of the ship is an authentic 125 pound wooden ships wheel. The ship is on display in the backyard at Doc's during the Spring, Summer, & Fall.

This is the shell that Carver donated to Doc. This will eventually become the Pirate Ship.

The beginning of building the three decks. 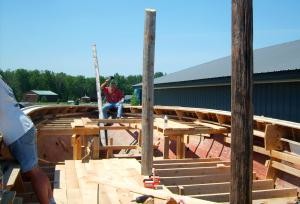 Over 5 1/2 months were spent in the sweltering summer heat building the ship. 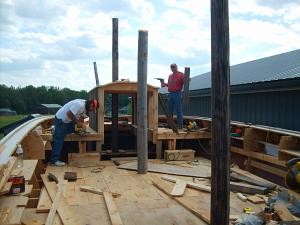 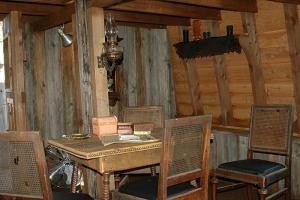 This is the ship on the morning of our Customer Appreciation day. Check out the skirting surrounding the bottom of the ship. Doc carved dolphins into them, then took the dolphins & put them on the side of the ship to make it look like the dolphins are jumping out of the water & their shadows are below them. 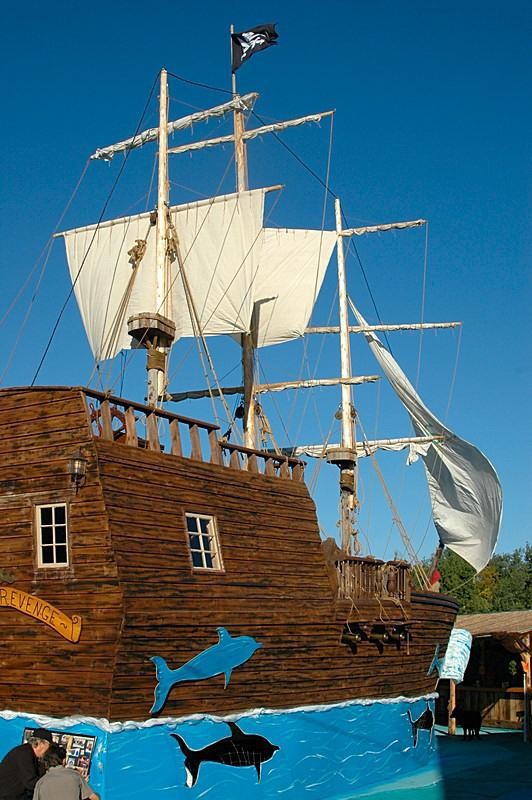 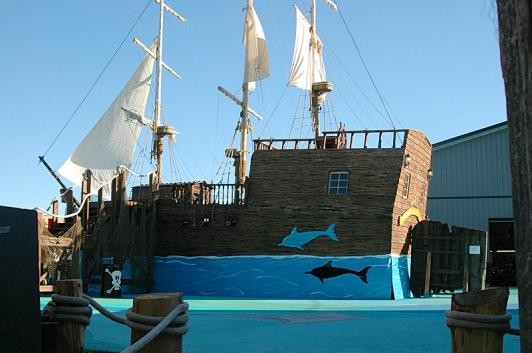