The Timeline Motorcycle Sturgis adventure was a big success. The bike left Doc's H-D on Saturday August 1st fully loaded with 10 people. Although the bike was trailered for parts of the trip, it was also ridden parts of the trip on each of the three days; including on Highway 29, in downtown Wall, South Dakota, on I-90, & into downtown Sturgis. Special thanks to Sturgis Harley-Davidson for allowing us to display the motorcycle in front of their dealership. Thank you to Hupy & Abraham s.c. for believing in us enough to help sponsor our Sturgis trip. We flew the "Watch for Motorcycles" flag with pride. Much appreciation to all of the individuals that helped Doc make this dream a reality, including the group of "crazy" people that accompanied Doc for the Sturgis adventure. The Sturgis trip was definitely the trip of a lifetime.

Be sure to stop by and get your picture taken with the Timeline Motorcycle now on display at Doc's Harley-Davidson.

Departure has been scheduled for 9:00 a.m. Saturday Aug 1. Weather permitting, we will leave Doc's at 9am with a full load of 10 people on the Timeline Motorcycle! Also, just released today...  Hupy & Abraham s.c. will co-sponsor our Sturgis Adventure! Thank you Hupy & Abraham!

The finishing touches are being added to The Timeline Motorcycle. The starting of the center five engines (Flathead thru Evo) took place on July 23rd. As expected, they all ran perfectly. The riders have been selected for the journey & departure from Doc's Harley-Davidson is planned for Saturday morning August 1st. We plan to reach downtown Sturgis by Monday August 3rd with planned stops in Jackson, MN, & Wall, SD.

The fenders for the Timeline bike arrived today. See the photos below to see the classy new black & white paint job. We also have decals that will go along the top frame rail. These decals are neat classic photos of the various motorcycles from each of the eras of the engines in the Timeline motorcycle. Starting at the very front of the bike, Doc will have photos of the 4 founding fathers of Harley-Davidson, the original shed that the first Harley® was built in, & various photos of the early Harley-Davidson motorcycle. The bike will literally be a rolling Harley-Davidson® history lesson. Doc is hoping to have the motorcycle near completion by early next week. Less than 18 days til' Sturgis! 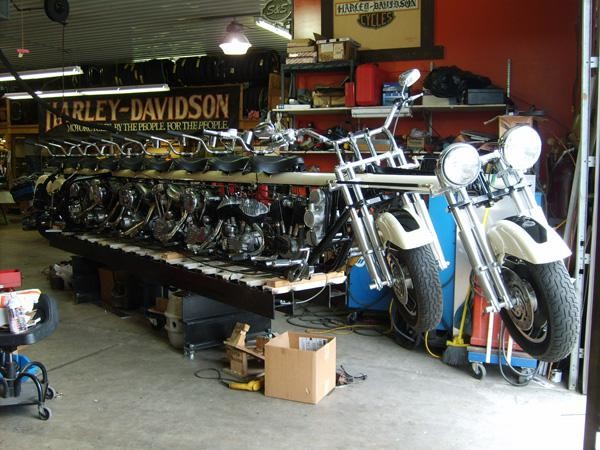 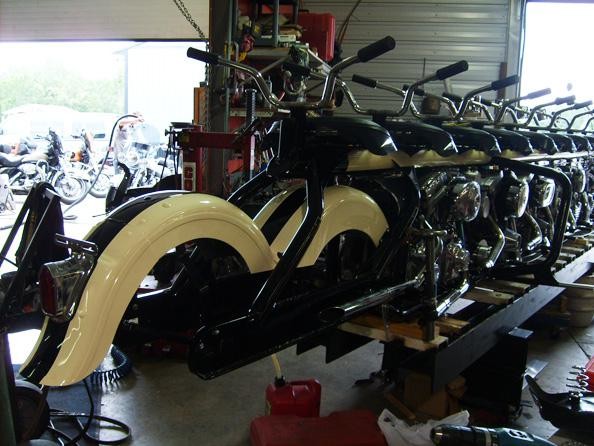 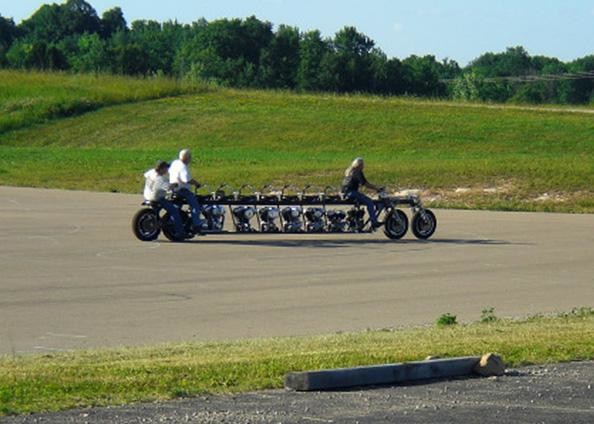 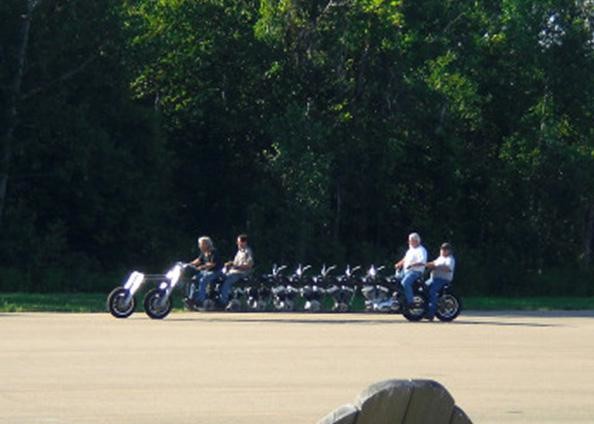 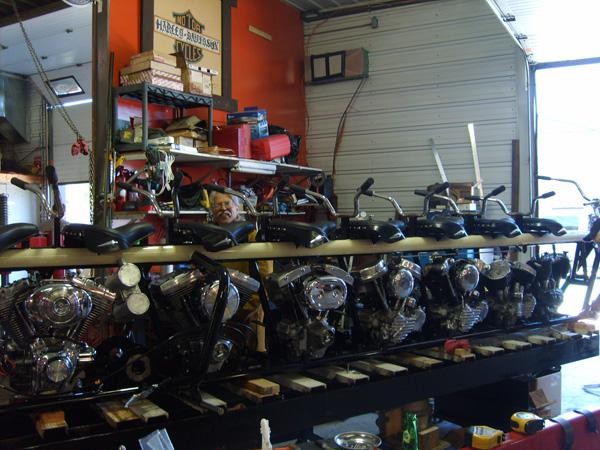 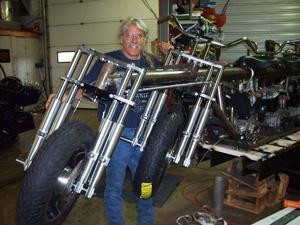 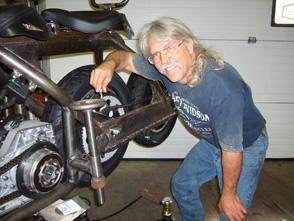 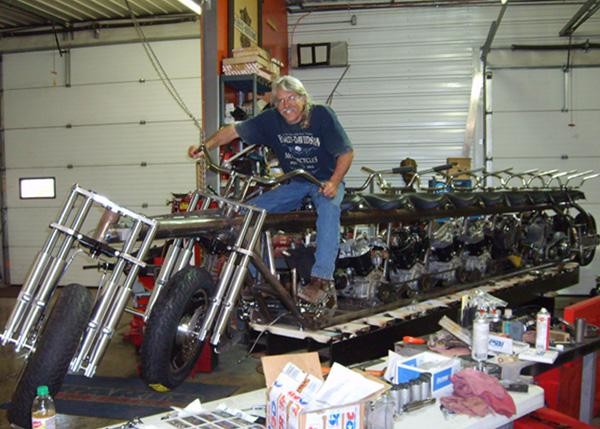 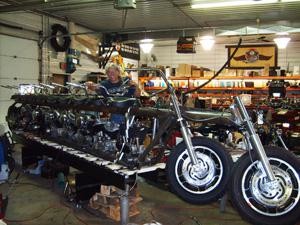 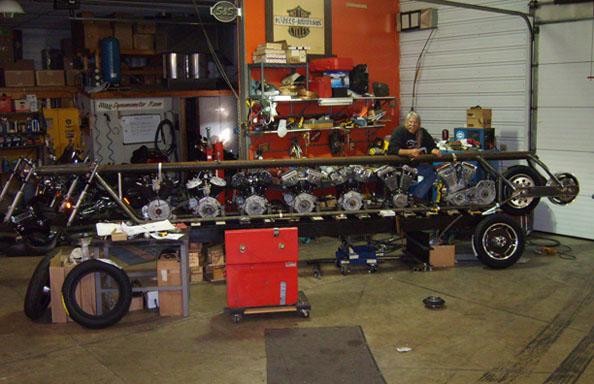 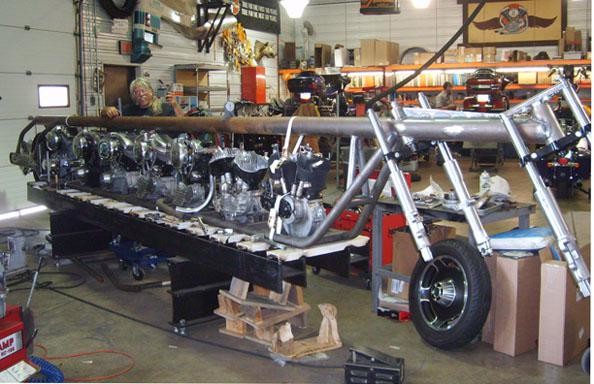 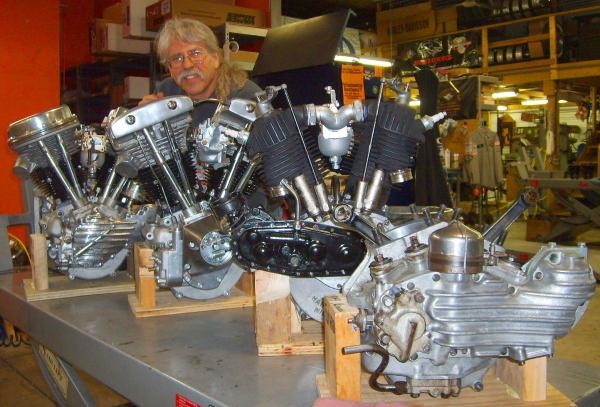 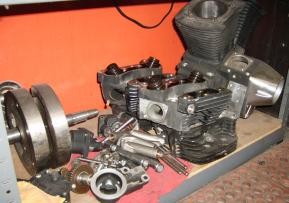 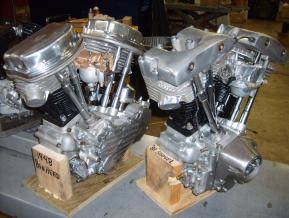 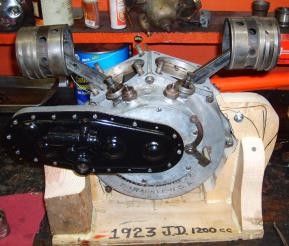 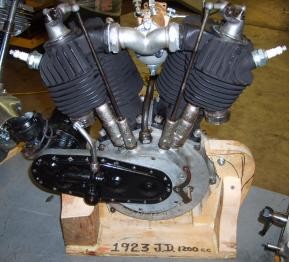 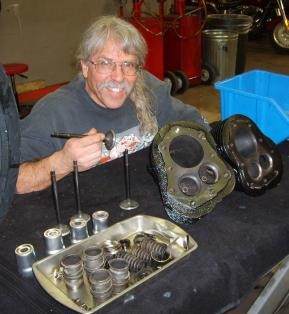 About halfway through building the "Four-Tee-Five" bike, Doc was struck with another idea. Build a multi-engine bike that will show the progression of all Harley-Davidson® Big-Twin eras from the 1920's to present. Doc began gathering parts to build the seven engine chronicle of history dubbed "The Timeline Bike" in December of 2008. The bike will feature a progression of engines including a 1923 JD 1200cc, a 1944 Flathead 74" 1200cc, a 1946 Knucklehead 1200cc, a 1948 Panhead 1200cc, a 1981 Shovelhead 1340cc, a 1993 Evolution 1340cc, & will be finished off with a Twin Cam® Motor. If that's not impressive enough, it will also feature 2 front forks, 2 front wheels, & 2 rear wheels all in a line. Just the seven engines alone will require 13 feet of length once they are placed in a row & yes... all seven motors will run!

Be sure to check back soon for more photos & updates on the progress.